The New Voice Choir (NVC) has been running since late 2015. We were, in fact, the first Parkinson’s choir in Queensland.

We are quite unusual amongst Parkinson’s choirs internationally, and for several reasons. One of these is that our experienced Musical Director, Linda McIntyre (also a professional musician, composer and teacher) happens to have PD herself.

In common with most Parkinson’s choirs, we welcome all people with Parkinson’s, their carers and supporters. We don’t even expect our new members to be able to sing in tune!

Most definitely not in common with most Parkinson’s choirs, however, are various features of the New Voice Choir’s repertoire. For instance, as well as the usual list of unison singalongs, we work extensively in three part harmony, frequently breaking into four or even five part!

We have a Musical Director who knows exactly how to teach it and so after a bit of fun practice, our efforts can transform into gloriously uplifting, harmonious sound! Imagine what this can do for the members of a Parkinson’s choir, many of whom had never before sung in a choir, let alone a multi-part choir!

Another unusual plus is that our Musical Director, wearing the hat of a professional composer, creates original score and arrangements that directly target many aspects of Parkinson’s Disease, then encourages us to continue practising between rehearsals, providing us with carefully crafted practice tracks for the purpose. We are working to produce the correct notes, of course, but also to improve such elements as voice production itself and dynamic control (ie, loudness or softness), vocal tone and expression, breath control, articulation and pronunciation – to name just a few of the basics.

Each weekly rehearsal of NVC is a fresh opportunity to enjoy the many physical and psychological benefits of group singing, and there is an underlying sense of great pride and accomplishment among members as improvements become apparent. Sometimes a chorister can even relate a proud tale of a clinical assessment where his or her clinicians have noted the positive changes!

Finally, no summary of the New Voice Choir can be complete without mention of the genuine warmth, friendship and caring that bond our members. Rehearsal time is never a mundane practice session! Instead, it’s where we encourage and support one another, where we catch up socially (preferably not when we’re supposed to be singing!), and where – singing or not – we have some good old-fashioned fun and belly laughs!

We join together each week in harmony, sharing a joyful space filled with enthusiasm, motivation, and real achievement! And, in doing so, we become not merely a choir, but a choir that has established itself as a powerful New Voice within the Parkinson’s community!

The New Voice Choir is, quite simply, special. 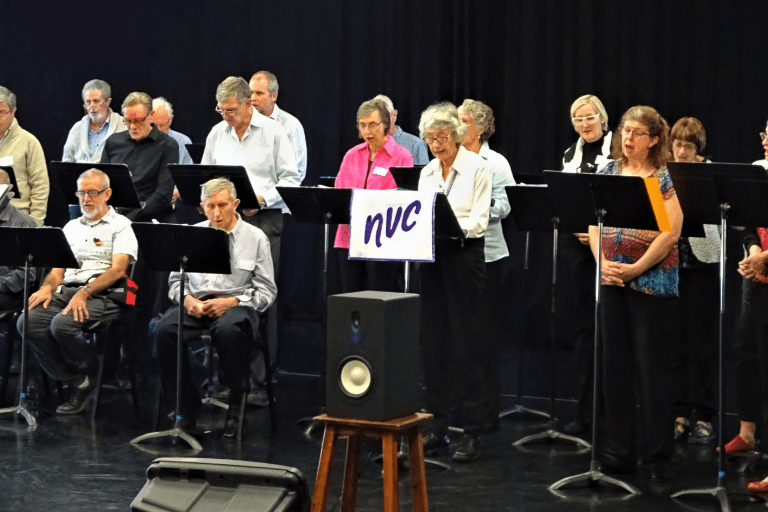 Help Us Make a Difference

Oops! We could not locate your form.